Why we should protect lions? | World Animal Protection Skip to main content

Why we should protect lions?

Without lions our world would be a much darker place. These beautiful iconic animals, often described as the ‘king of beasts’, shine as symbols of bravery, justice and protection.

There are only 600 Asiatic lions left in the world. More than 300 of them live outside the Gir Forest protected area which makes the species at great risk of extinction.

Lions are also a keystone species – incredible hunters who do an amazing job of balancing ecosystems.

Lions are the second largest big cats after tigers, and there are two species left in the world today. These are the African lion and the Asiatic lion. The Asiatic lion population is very small – there are only around 600 living in or around the Gir Forest National Park area in Gujarat State, India. African lions are found in Sub-Saharan Africa and it is thought there are fewer than 30,000 left in the wild.

Species related to African and Asiatic lions once lived throughout Europe, Asia and Africa. Scientists believe that African lions, as we know them today, have been roaming eastern and southern African savannahs and grasslands for around 124,000 years.

African lions can grow up to three metres long from head to tail; they are heavy animals weighing around 150 to 250 kilograms. Males are heavier than females.

Lion manes are big too. Only males have them; they can grow to around 20cm long. Manes are believed to be a sign of dominance that help in attracting females.

Asiatic lions are smaller than African lions; the males have smaller manes which show their ears.

African lions usually live in ‘prides’ – groups of, on average, 10 to 15 animals. These groups usually include related females, cubs, and a male, or a small group of males who defend their pride and mate with the females.

A pride’s territory can extend to several hundred square kilometres and include areas of grass, shrubs and open woodlands. Prides often roar together to mark their territory. Even young cubs join in, but they are too little to roar, so they just mew. These roaring sessions can last up to 90 seconds. 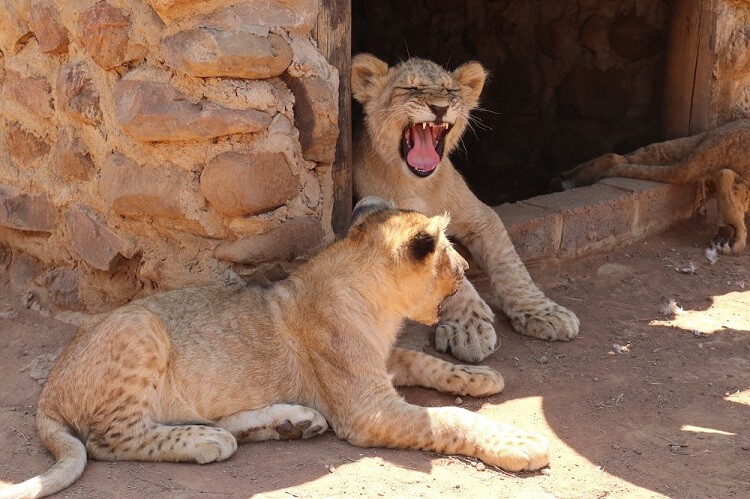 Male lions usually start breeding when they are around four or five years old. This is when they may leave their original pride, take over another and breed with the lionesses within it.

It’s not unusual for male lions to kill all cubs in the pride they are trying to take over. They do this to avoid competition later on. Lions live up to15–16 years in the wild.

Female lions usually have their first litter of cubs when they are around four years old after a pregnancy of about 12 weeks. Mothers give birth away from other pride members and keep the cubs hidden for the first six weeks of their life. They then rejoin the pride. Newborn cubs are small, helpless and completely dependent on their mothers.

Animals the size of antelopes, zebras and wildebeests are their usual prey. Lions are also opportunists – they scavenge and steal other predators’ kills. They can eat a lot – for males this can reach as much as 40kg of meat in a single day. In dry areas, lions can go several days without drinking – they will get most of their water from their prey and plants.

Lions are a keystone species They are important predators – the only wild animals in Africa big enough to bring down big herbivores like elephants and giraffes. They also kill smaller herbivores like buffalo, zebras and wildebeests.

If herbivore populations are left unchecked there is less food available for all animal populations – including people. Lions help keep herds healthy as they usually prey on the sickest, weakest, and oldest animals.

There are only 600 Asiatic lions left in the world. More than 300 of them live outside the Gir Forest protected area which makes the species at great risk of extinction.

African lions are listed as vulnerable to extinction by the International Union for Conservation of Nature. They are threatened because of habitat loss through the clearing of land for human settlement and agriculture, loss of prey species, and human-animal conflict.

With your help we will stop the cruelty that the wildlife trade for medicine and entertainment inflicts on the world’s lions. With your support we can keep these magnificent animals in the wild where they belong. 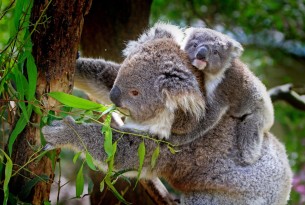 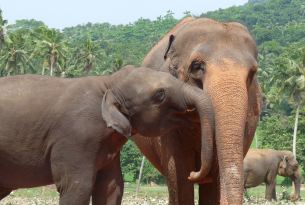 With Valentine’s Day around the corner, let’s look at the animals that love unconditionally.

From rumbles and chirps to whines and whistles, animals can produce dozens of different sounds for different purposes.