“There are lots of opportunities for Liz Hurley to see elephants in the wild in South Africa. Now she knows about cruelties of riding an elephant let’s hope she shows compassion and sets a positive example in the future.” Kate Nustedt, our global wildlife director

One of the world’s cruellest forms of wildlife entertainment

Elephant riding is on our list of the world’s cruellest forms of wildlife entertainment. So we were disappointed to see that the British actress and model Liz Hurley, had tweeted the recent image.

It may not be known to Liz and many tourists who genuinely care about animals, that over 500,000 wild animals suffer in the name of entertainment at tourist attractions every day.

Our animation shows the reality behind elephant riding.

Behind the scenes, elephants experience endless suffering as most of them are kept at venues with severely inadequate welfare conditions, to provide elephant rides and shows for tourists.

This life of captivity begins with severe trauma, with young elephants separated from their mothers before suffering a harsh training process to break their spirits. This makes them submissive enough to perform tricks and give rides to tourists.

When not giving rides or performing, most of the elephants are chained up day and night.

Moving the world to protect animals

To help bring an end to this cruelty, we provide travel tips for tourists, so they can avoid cruel animal attractions. We also work with travel companies globally, urging them to stop sending customers to cruel wildlife entertainment venues.

This campaign work has seen huge success in moving the world to protect animals. Globally, 166 travel companies including TripAdvisor, Contiki, Kuoni Travel UK and Jetair have committed to no longer offer visits to venues with elephant rides and shows in any of their markets.

Despite this, there are still several companies yet to commit to ending elephant rides and other cruel elephant entertainment, including Virgin, Audley Travel, Trailfinders and The Ultimate Travel Company in the UK.

‘Never acceptable to ride an elephant’

Kate Nustedt, our global wildlife director, said: “It’s never acceptable to ride an elephant. All elephants used for entertainment suffer a cruel and intensive breaking-in process so they will be submissive enough to give people rides. Their suffering continues throughout their lives in these cruel elephant camps. They are held captive in chains, beaten with metal bull hooks, and unable to form natural social bonds.

“There are lots of opportunities for Liz Hurley to see elephants in the wild in South Africa. Now she knows about cruelties of riding an elephant let’s hope she shows compassion and sets a positive example in the future.”

You can help elephants in need by pledging to avoid elephant rides and shows here. 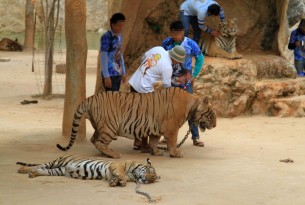 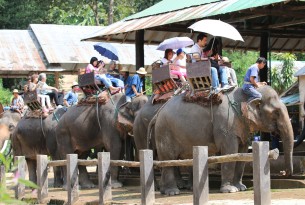 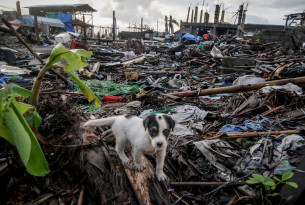 As the climate changes, disasters strike more intensely and more often. Animals are killed in the millions from lack of food and water, disease outbreaks, or...

Our petition urging Thailand’s Department of National Parks, Wildlife and Plant Conservation (DNP) to put a stop to a ‘new Tiger Temple’ tourist venue, has...