Around the world, more than 3,000 dolphins have been bred in captivity or taken from the wild to be used for entertainment in tourism venues.

Where do captive dolphins come from?

Whether wild caught or captive bred, dolphins in dolphinaria face a lifetime of suffering. That is why an Australian Senate report, more than thirty years ago, recommended that dolphin captivity be phased out in Australia.

Around the world, many dolphins currently in captivity were once wild and free. While some water parks obtain dolphins legally, others find that doing so takes more time and money than they are willing to invest. As a result, a thriving illegal trade in wild-caught dolphins has emerged to meet the demand.

The capture process is extremely violent, inherently cruel and detrimental to the overall population. Dolphins are chased to exhaustion by people in speedboats, who separate a few dolphins from the rest of the group and corral them with a net. In a panic, the dolphins often injure themselves when they ram the net trying to escape. Injury and death (usually by drowning) are common. Studies suggest that mortality rates increase six-fold after capture. The dolphins may then be subjected to further trauma during travel in boats, shallow pens on trucks, or between countries on long-haul flights.

What is the difference between a captive dolphin’s environment and its natural environment?

Dolphins are intelligent and social creatures that, in the wild, interact with hundreds of pod-mates, hunt communally, and have entire coastlines as their playground. In captivity, all of this is lost. Social partners are restricted to a handful of tank-mates. Captive dolphins are fed dead fish (wild dolphins only catch and eat live fish) and they face a profound reduction in space and stimulation.

Dolphins in the wild may swim up to 100km in a day and can deep dive many metres. Even in the largest captive facilities, dolphins have access to less than 1/10,000 of 1% (0.000001%) of the space available to them in their natural environment. Because of this, dolphins in captivity are often restricted to swimming in circles. In many dolphins, this behavior is a sign that the dolphin is suffering psychologically; it is engaging in what is known as a stereotypical behavior. For an inquisitive, intelligent creature like the dolphin, a barren tank offers no exploratory stimuli compared to the vast, complex ocean.

Are there tanks that give dolphins enough space? Are some marine parks "better" than others?

Any tank or enclosure is too small for a dolphin.

No captive facility, no matter how much space it provides, how well intentioned it is, or how hard it tries, can adequately provide for a dolphin's complex needs.

How are dolphins trained? What happens if the dolphins decide they don't want to perform?

Dolphins in captivity are not given the option to end interactions or performances when they would like to. They are trained to perform. For many animals this means that satisfaction of hunger is dependent on performing tricks; for others, hunger is deliberately induced so the training will be effective. Though a complete food portion is ultimately provided each day, the use of food as a training tool reduces some animals to little more than beggars.

Captive dolphin programs often train dolphins to perform tricks that people equate with human responses and emotions. Movement of the pectoral flippers is taken to mean that the dolphins are waving a greeting. Vocalising seems to indicate that the animals are “speaking” to the crowd. Or, the dolphins swim directly up to tourists entering the water, apparently signalling their enthusiasm to interact. In reality, these are highly unnatural behaviors.

Is it ok to go to marine parks just to see the animals but not to watch them perform tricks?

Every time someone buys a ticket to a dolphin show or even to a facility or theme park that holds captive dolphins, they contribute to the suffering of these remarkable creatures. Like any other business, the dolphin captivity industry is based on supply and demand. As long as people are willing to buy tickets to watch dolphins (whether to perform tricks or to just view them through a glass wall), dolphins will be kept in captivity and trained to perform for audiences. Consumers have the power to stop the exploitation of dolphins by simply not buying tickets.

Dolphins are always smiling, doesn’t that mean they are happy?

The dolphin's toothy grin masks its suffering and contributes to the myth that dolphins in theme parks enjoy a happy life. In truth, dolphins cannot move their facial muscles to communicate inner feelings like humans can. Dolphins appear to smile even while injured or seriously ill. The smile is a feature of a dolphin's anatomy unrelated to its health or emotional state.

Do dolphins have to perform all the time or do they take days off? Do they mind the loud music and loud noises of the crowd when they are doing shows?

Captive dolphins often work 12-hour days without a break. Whether it is performing for the public or participating in dolphin petting pool encounters, dolphins are forced to participate by conditioning. During performances or petting sessions, their ears are assaulted by blaring music and the noise of people splashing water or slapping the sides of the tank to get their attention. In petting pools and feeding programs, the dolphins' health may be further compromised by people placing items such as sunglasses, cigarettes, stones, coins, food, and metal souvenirs into the mouths of dolphins. All of this takes a heavy toll on dolphins often resulting in stress-related illnesses and even death.

Is petting dolphins or "swimming with the dolphins" safe for people?

The public is often taken in by the dolphin's ‘smile' and assumes they are gentle, willing playmates. But make no mistake – these are wild animals and the smile is simply an anatomical quirk; it is not a reflection of the dolphin's emotional state.  People would not dream of putting their children or themselves in a cage with wolves, lions, or tigers. This natural caution is lost around dolphins.

Sometimes dolphins express their frustration through aggression either to people, other dolphins, or even by self-mutilation. Dolphins (including those born in captivity) are large, powerful predators, perfectly capable of harming humans. There have been instances where dolphin aggression has led to pushing people into deeper water, biting, and head-jerking. Injury reports document broken bones, skin abrasions and other injuries.

What about marine parks that participate in conservation and research, and release animals back into the wild?

As public perception changes, dolphin theme parks disguise their entertainment focus as being ‘educational' in an attempt to validate their existence. In reality, viewing captive animals gives the public a false picture of the animals' lives and provides no educational value. Worse yet, it desensitises people to captivity's inherent cruelties.

What’s the best way to observe and learn about dolphins without supporting a captive dolphin park or a "swim with the dolphins" program?

The best way to commune with dolphins is from the deck of a dolphin watch operation that follows a responsible code of conduct or, better yet, from shore, where you can be sure that you're not harming them and they can't harm you. 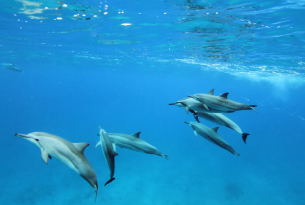 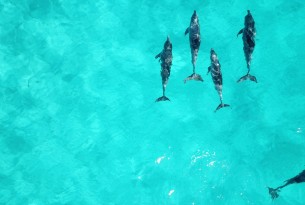