For some families, animals are the only way they can afford to buy medicine, clothes and food. By treating animals we helped to give their owners hope, and the opportunity to rebuild their lives more quickly.

Today marks four years since the catastrophic 7.0 magnitude earthquake that hit Haiti in 2010. Just 72 hours after the event, our Disaster Operations Director for the Americas, Gerardo Huertas, was deployed to Haiti.

Within days, our team had helped to set up the Animal Relief Coalition for Haiti (ARCH) – the only coalition formed to provide relief for the animal survivors of Haiti and address the threat of diseases spreading from animals to humans. Working in partnership with the International Fund for Animals Welfare (IFAW), ARCH successfully treated over 70,000 animals, giving hope to communities that rely on their animals to survive.

Now, on the fourth anniversary of the earthquake, Gerardo recalls what it was like to oversee the relief operation in such tough conditions.

“Before we got to Haiti, we spent a few days in the Dominican Republic (DR) buying medicine and equipment because we knew other organisations were struggling to get the resources they needed. Although the DR is just next door to Haiti, it was largely unaffected by the earthquake and so it was hard to believe the devastation that occurred 200 km away.

We chartered a small propeller plane to Haiti and looking through the window we could see that large areas of Port-au-Prince had been entirely flattened. The airport was so damaged, we didn’t know if it would be possible to land. Despite 20 years of responding to disasters, nothing could have prepared me for chaos that we stepped into.

Doctor Jean Thomas, a veterinarian in Haiti for more than 20 years, came to collect us from the airport accompanied by heavily armed guards. I had met Dr Thomas on a previous assignment and he had kindly agreed to serve as our Disaster Liaison Officer in Haiti and let us stay in his home. I ended up staying in his basement for the first two months of the operation.

Our first priority was to meet with the Haitian government and offer our help. It was important for us that we worked alongside the government so that they were in a position to continue our work once we left. We met with the Ministry of Agriculture but they were in a state of shock. Many of their colleagues had been instantly killed by the earthquake and, although we didn’t know it at the time, many more would later contract malaria or cholera and die as a result.

One of the first things we did was hire a by-plane to survey the main areas of damage. We had no idea whether any animals had managed to survive, but we knew we had to find out. Within days we set up Animal Relief Coalition for Haiti with our partners, IFAW. It was the first time animal welfare organisations had formally come together in a bid to strengthen and coordinate the response effort. In little over a year, we had treated 70,000 animals through the mobile veterinary clinic.

Within the first few days of the disaster, most of the surviving animals we saw had been injured or trapped by collapsed buildings. But as the weeks went on, starvation and disease became the biggest problems.

Rabies and leptospirosis was a huge concern. Before the disaster, the government had been running rabies vaccination programmes to prevent people from contracting the disease through animals. However, the programme was hugely diminished after the disaster.

We stepped in to help. Each time the government received a report that someone had been bitten by a dog we would set up a surveillance ring around the site and vaccinate all the dogs within that area. We also helped diagnose leptospirosis in people by setting up brand new diagnosis buildings, complete with the necessary infrastructure and equipment to make diagnosis possible in many parts of the country.

Haiti is one of the poorest and least developed countries in the world. The earthquake made things worse, completely wiping out the country’s infrastructure and making the simplest things very difficult. The roads, for example, were terrible - we had to change tyres every three months. Food and water was contaminated and crime was widespread. The biggest challenge was just keeping my team alive.

Helping the animals and people of Haiti to recover

Animals play an incredibly important role in Haiti. For many families, their pet is a member of the family. For children suffering from post-traumatic stress, the health of their pet is crucial to their emotional well-being, which is why thousands of families brought their animals to the mobile veterinary clinic for treatment.

Farm animals also play a vital role. Many of the people we met said they would have been unable to put their children through college if it wasn’t for their pigs or cattle. For some families, animals are the only way they can afford to buy medicine, clothes and food. By treating animals we helped to give their owners hope, and the opportunity to rebuild their lives more quickly.” 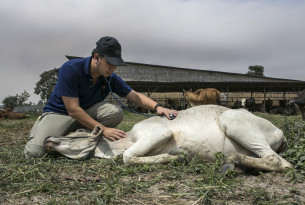 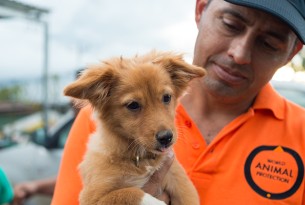 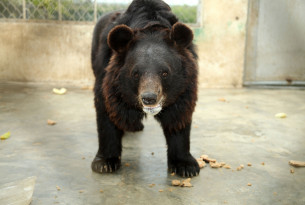 The quick thinking of our vet, Dr Jan Schmidt-Burbach, has saved the life of a much-loved bear at our Balkasar Sanctuary in Pakistan. 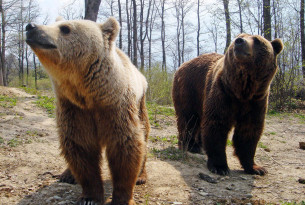 Check out these fascinating and little-known facts about our beautiful Romanian bear sanctuary, run by our partner Asociatia Milioane de Prieteni (AMP), from...