My journey towards plant-based eating

Our relationship with food and the way we eat is something that develops quite early in life. Like many people in Australia, I grew up in a household where meat was a regular staple at mealtime. Despite how ingrained our meal choices can become, there are different motivators that may push each of us to reconsider what we eat.

Changing what you put on your plate can seem challenging, but I found there was plenty of help and support available.

Before I started working at World Animal Protection in 2017, I was already well aware of the environmental footprint of factory farming, with its significant contribution to greenhouse gas emissions, land use change and water usage. I knew that red meat was one of the biggest contributors to this environmental harm, but I had never been a big consumer of red meat. It was something I would eat very sparingly – usually only if it was prepared at a family event. I believed that by choosing to eat mostly white meat like chicken, I was already making a better choice for the environment. The motivation I needed to reconsider what I was putting on my plate came shortly after I joined the World Animal Protection team.

While I have always loved animals and had a passion for helping improve their lives, I was not fully informed about the current factory farming system and the suffering many animals are forced to endure. I was genuinely shocked to learn that in Australia, more than 650 million chickens are raised in cruel factory farms each year. They grow to their full size and are killed in just five to six short, miserable weeks. Similarly, I learned that mother pigs around the world are often kept in cages for most of their lives, barely able to turn around or nurse their piglets. As I learned more about the suffering of these intelligent animals, I knew I had to make a change.

Changing what you put on your plate can seem challenging, but I found there was plenty of help and support available. I reached out to colleagues who had made a similar change and asked for their recipe recommendations. Speaking with colleagues was a good start, but a few weeks in, I realised I needed more support. Working full time and juggling part time studies at university meant I had limited time available to spend in the kitchen at the end of the day. I did my research and found a number of excellent meal kit delivery services that offer vegetarian and vegan meal kits. My partner and I signed up for HelloFresh for three nights a week to help get us started. It was such an easy way for us to learn new and exciting recipes. Now, we have a whole suite of veggie options that we can prepare in 30 minutes or less – many giving us enough leftovers for lunch the following day too!

We started with just three days a week, but after the first year, we found it easy to cut back further – I removed meat from my diet entirely and only eat dairy and eggs very sparingly. While my initial journey took me a year, it’s now been three whole years since I ate meat, and I don’t miss it. But that was my choice. My partner adopted a slightly different path and is now a flexitarian – eating plant based at home but still including some meat on special occasions. Ultimately, you don’t need to adopt an ‘all or nothing’ approach. Start by making small changes – if you keep it manageable, you’re more likely to make the changes last. 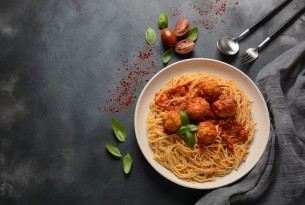 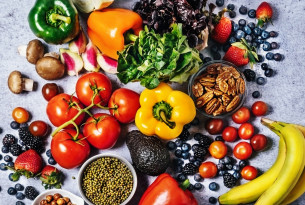 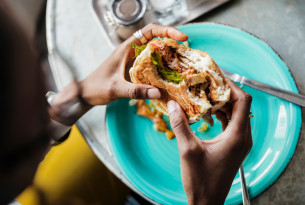 You'll want to save this burger recipe for your summer BBQs! Add your favourite fillings and it'll be a crowd hit!

Throw these meatballs into some delicious pasta or on a roll with your favourite plant-based cheese and you'll have a delicious meal even kids will love!